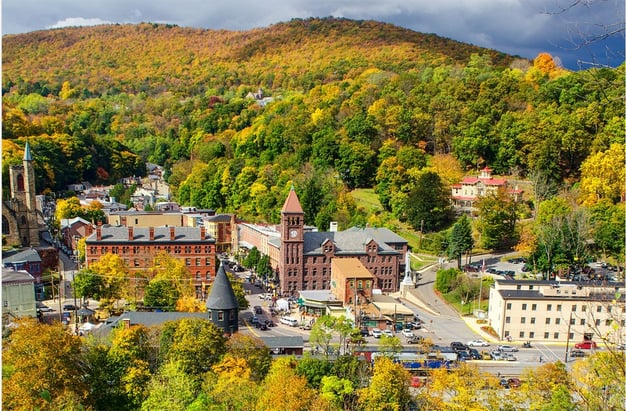 The community of Jim Thorpe is one of the most visited small towns in the whole Poconos region. National media consistently ranks it on their “best-to-visit” lists as among the most beautiful, romantic, and fun adventure towns in the country. What they may not realize is that it’s also a great place to live. Here’s a look at some of what makes Jim Thorpe so appealing.

If you enjoy a small town with a rich history, you'll find Jim Thorpe fascinating. Of course, it wasn't always known by its current name. Originally, it was known as Mauch Chunk (taken from the local Lenape Indian name which meant “Mountain of the Sleeping Bear”). It traces much of its history back to the early days of the growth of industry in the United States.

The anthracite coal that was mined nearby played a huge role in fueling the Industrial growth of the U.S. Coal powered industry, manufacturing, and transportation, and the area had it in abundance. As a result, the town attracted the movers and shakers of the time. In fact, in Victorian days, 19 of the 26 millionaires living in the United States had a residence in Mauch Chunk. Even then, the natural beauty surrounding the town led to it being second only to Niagara Falls in popularity as a tourist destination.

As the country moved to other sources of power, the future of Mauch Chunk was in jeopardy. In the 1950s a group of local entrepreneurs collected $30,000 from local residents and used it to arrange to have the remains of Olympic hero, Jim Thorpe, interred in the town and even changed the name to Jim Thorpe (even though the famous Olympian had never been there). Even though Thorpe’s name didn’t attract visitors the way it was hoped, something else brought them in.

Jim Thorpe has been called the "Switzerland of America" due to the picturesque scenery, mountainous location, and architecture. It’s also known as the "Gateway to the Poconos." The natural beauty of forests, streams, and lakes surrounds the town. A prime example is the Delaware Water Gap National Recreation Area, that offers spectacular views and plenty of ways to enjoy those vistas.

It’s a Bit of a Cultural Mecca

A lot has changed since the town's Victorian heyday as the home to millionaires and industrialist. But the town has been attracting a new group of residents for some time. It has become home to generations of creative professionals (musicians, painters, photographers, filmmakers, designers, performers, and writers. The beautiful surroundings and slower pace of life have been most appealing to this group of individuals, and the town has multiple venues and events that allow these creative types to showcase their works. Some of the regular events in the town include:

And this year the town is proud to celebrate the Old Mauch Chunk Bicential—all year long! 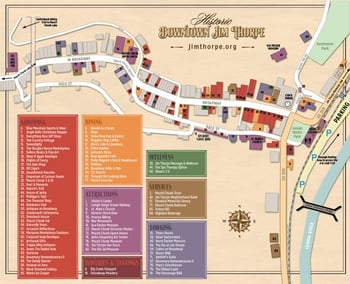 It’s Easy to Get Around

The town’s small size makes it easy to find whatever you’re looking for. But just in case you want to plan your outing in the town, you can click here to download a walking map of Historic Downtown Jim Thorpe that will highlight shopping opportunities, dining locations, wineries and tastings, a variety of local attractions, and more!

Other Factors That Make Jim Thorpe an Attractive Place to Live

At Liberty Homes, we can help you find the right property in the area around Jim Thorpe, and we also offer a variety of home styles, and floor plans to ensure you end up with the perfect home for a perfect little town like Jim Thorpe.

Topics: Poconos Lifestyle, Where to Live in the Poconos, exploring Jim Thorpe