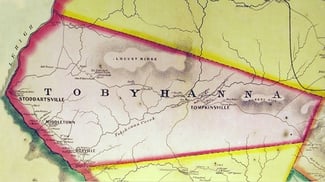 The name Tobyhanna Township has a nice ring to it—even if it doesn’t exactly flow easily from the lips. The township’s name has its origins in Native American language, roughly translated as, “a stream whose banks are fringed with alder". Those trees—and others—were later to play a significant role in the development of the area. For many years, however, the area was largely undeveloped with only 239 residents calling the township home in 1830. By 1900 the population was still below 900 residents.

Some of that may have had to do with the higher elevation (nearly 2,000 feet) that caused winters to linger a little longer and be a bit harsher. On top of that, the area was home to dense forests of pine, hemlock, spruce, oak, cherry and mountain laurel. The high quality and density of those forests, however, drew significant lumbering activity in the Township. The area provided building materials, shipbuilding and leather tanning, materials. Wooden clothespin and shoe peg manufacturing flourished alongside the production of roof shingles and barrel staves. Christmas trees and greens for wreaths were shipped to nearby cities. So important was the lumber industry that they had “royalty” of their own, including Isaac Stauffer who became known as “King of the Poconos.”

I mentioned that winters were a bit longer and harsher in the area. That, too, provided for economic growth. The burgeoning population of the New York and Philadelphia metro areas led to a growing need for refrigeration to preserve food. The consistently cold winters in the Township provided an environment in which huge amounts of ice form on lakes—waiting to be hauled away.

There was, however, a shortage of natural lakes from which to gather ice. So man-made lakes were created, including Stillwater Lake, and Naomi Lake (now Lake Naomi). In addition Pocono Lake and Anglewood Lake were enlarged to allow the creation of more ice—which was subsequently stored in enormous ice houses before being shipped out.

The railroads that carried the ice to the cities also brought people to the region that wanted to flee the hot crowded conditions in the summer. That lead to the construction of the first boarding house in the region (the Naomi Pines House) which evolved into a resort offering therapeutic springs, fresh air and modern conveniences. It was followed by other ventures, including the Laurel Inn, Pocono Manor, the Pocono Lake Hotel, the Antlers, the Linnie Lee and Between the Pines.

Interestingly enough, trees, water, and winter continue to be things that draw people to this 52.6 square mile township. And while the population has grown to 8,544 (as of the 2010 census), people come from miles around to enjoy those things. Today, however, they are more interested in leaf peeping, hiking, boating, fishing, and snow skiing  in the area.

Enjoying nature remains a big draw for the area, and Tobyhanna Township has numerous parks that allow residents and visitors to do just that, including:

The Austin T. Blakeslee Natural Area is one such place. Originally used for farming, it became a popular, active recreational park (Harrison Park) until before being destroyed by a flood in 1955. Today, the Austin T. Blakeslee Natural Area is comprised of approximately 130 acres of permanently protected land. The Tobyhanna Falls have been a treasure for generations to the residents in the Blakeslee area. The area is kept in its natural state, with the exception of a few paths and other minor improvements to allow the public to enjoy its scenic beauty and to allow fishermen access to the Tobyhanna Creek. It is open Dawn to Dusk daily. Click here for a map and additional information.

Blanche D. Price Park is a another of Tobyhanna Township’s treasures and is located in Pocono Pines, off of State Avenue. The park offers picnic areas as well as a well-equipped playground. There are ball fields, basketball courts and tennis courts. The Main Lodge Building is located in the park and is popular to Township residents for rental in the summer. The Main Lodge Building is available for rental from May 1, 2016 to October 10, 2016.

Earlier I’d mentioned that the lumber magnate Isaac Stauffer was known as “King of the Poconos.” He was, however, not the only “King” in the area. Jubilee Restaurant in Pocono Pines has been serving up the most unique and delicious breakfasts in the area since 1968, earning them the moniker, “The Breakfast King of the Poconos.” If breakfast is your meal, you’ll want to join the locals for the best breakfast around as you explore the natural beauty of Tobyhanna Township and check out the villages of Blakeslee, Pocono Lake, Pocono Pines, and Pocono Summit.